Top Chef’s Fatima Ali has died of bone cancer at the age of 29, just months after being told she had just a year to live.

Chef Bruce Kalman, her close friend and fellow Top Chef contestant, broke news of the death on Instagram: ‘It’s with a heavy heart we say goodbye to Fatima Ali today, as she has lost her battle with cancer. I will miss you Fati, and you will be in my heart forever. I’ll always remember the great times we had, especially our interview during the tailgating episode discussing football, stadiums, and Taylor Swift.’

Fatima was first diagnosed in 2017 with Ewing’s sarcoma, a fairly rare cancer that affects bones and the tissues surrounding them. 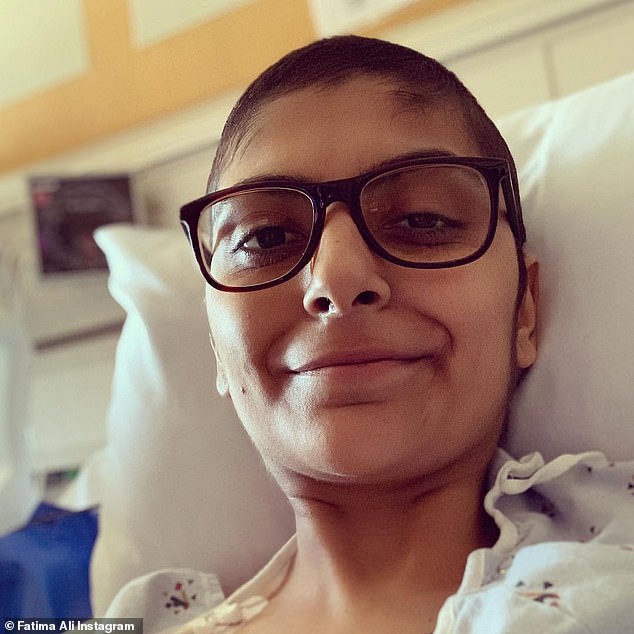 Top Chef season 15 contestant Fatima Ali dies of bone cancer aged 29; she is seen in her hospital bed in November 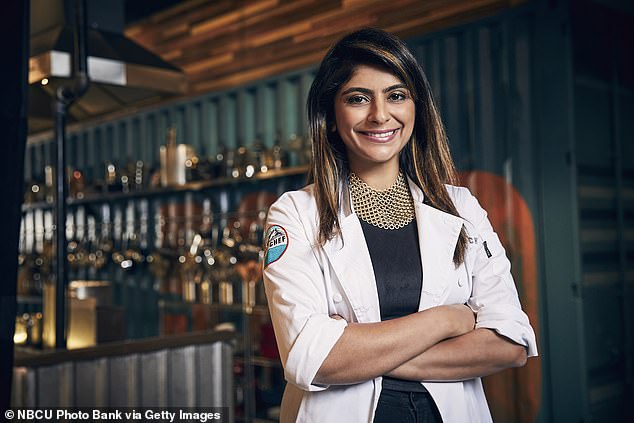 As she was: The Pakistani-American chef competed on season 15 of the show

She underwent aggressive rounds of chemotherapy, followed by surgery to remove the cancer in January 2018, shortly after filming Top Chef.

Fatima was initially given the all clear following her treatment, but in October tests revealed the cancer had returned and was now terminal. She was given a year to live.

Earlier this month Fatima posted a photo to Instagram in which she revealed that she was getting sicker. In her photo, Fatima appears from the neck up with a soft smile on her face.

‘I know it’s been ages since I posted and most may have figured out why,’ she wrote in the caption. ‘I’m sick and unfortunately I’m getting sicker. Right now all I need are prayers; prayers that are simple.’

The Chopped winner seemed to be addressing a higher power and asking for forgiveness.

‘I hope, because a wish is putting on too much responsibility on the other, that you will somehow find forgiveness in your big heart for whenever I must have hurt you.

‘I thank you a million times over for when you have given me joy. I’ll try to keep everyone updated the best that I possibly can.’ 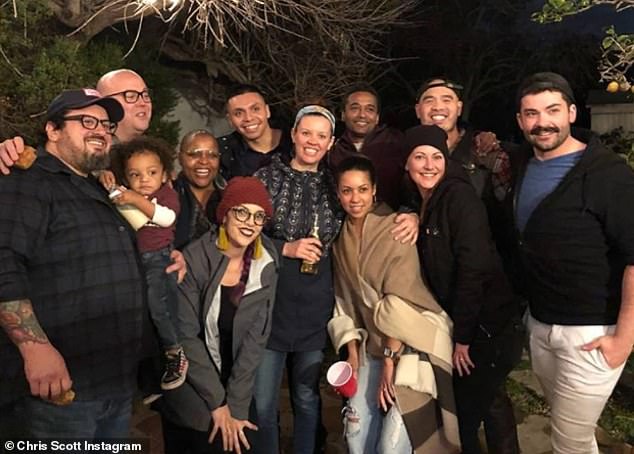 At her side: Top Chef’s season 15 contestants traveled far and wide to be with fellow competitor Fatima Ali in California earlier this month

On Friday the tributes flooded in to the young chef, who was named Viewer’s Favourite on the show.

Ellen DeGeneres shared a picture of Fatima on her show, writing: ‘I was lucky to share this visit with Chef Fati. I wish I could have shared more.

‘Sending so much love to her family. I hope they find comfort in knowing how much light she brought to the world.’

Bravo’s Andy Cohen tweeted: ‘This is very sad news. What a lovely woman.’ 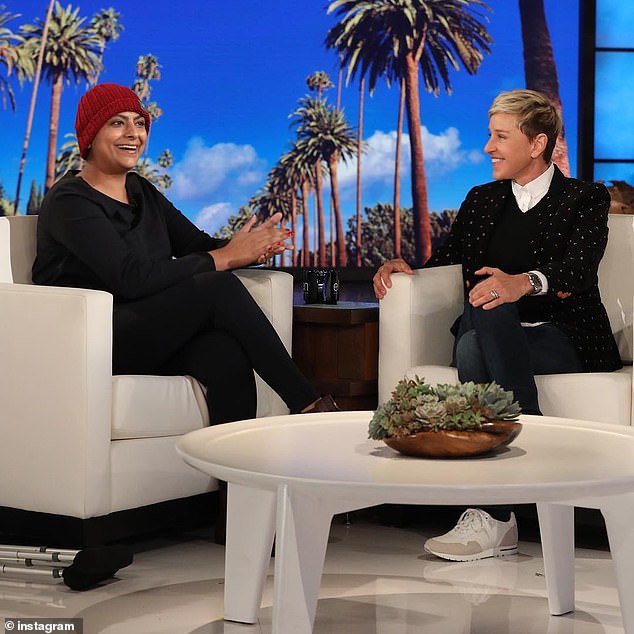 Missed: Ellen DeGeneres shared a picture of Fatima on her show, writing: ‘I was lucky to share this visit with Chef Fati. I wish I could have shared more 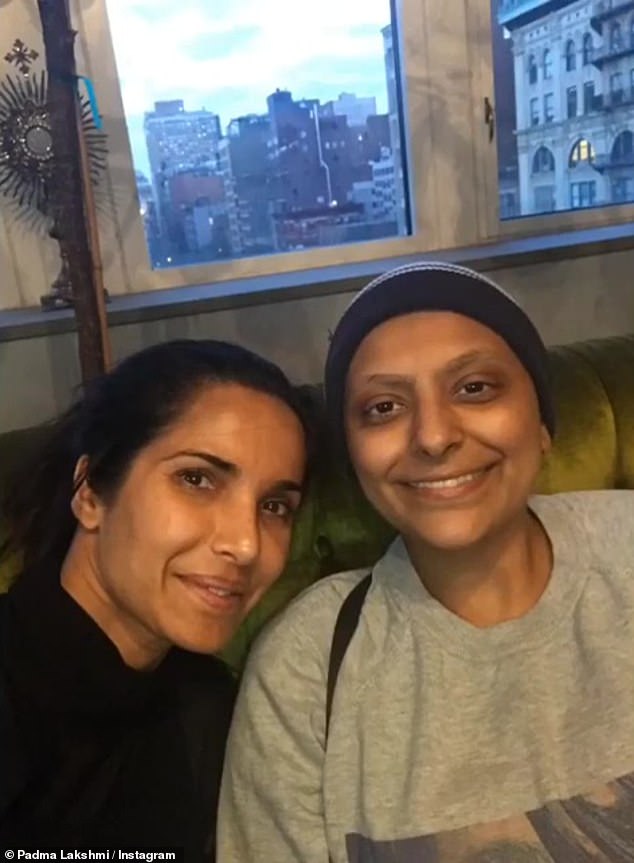 Friendship: Padma Lakshmi shared a series of photos with Fatima 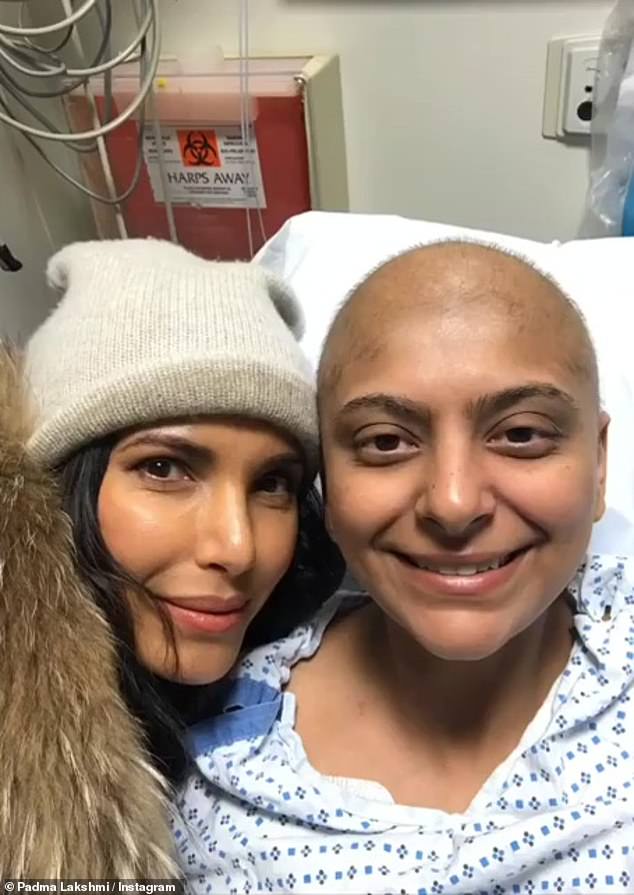 Friends: The Top Chef host formed a close bond with Fatima since working together 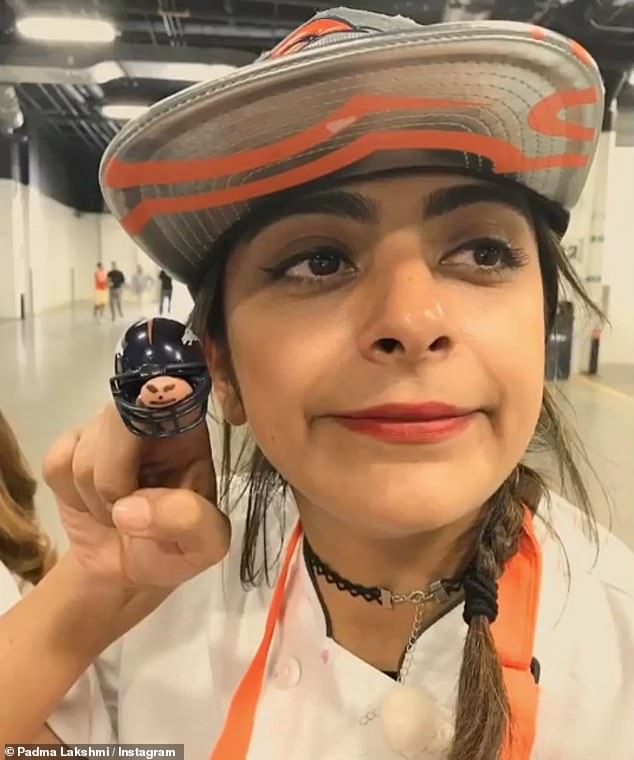 Top Chef host Padma Lakshmi had formed a close bond with Fatima since working together two years ago.

She wrote on social media: ‘Goodbye lil’ sis. One of our brightest stars has fallen from the sky.

‘I have no words, but here are some of hers: “I dream of being better. I dream of being myself again, but I know I’ll never quite be the same, and that’s okay. I look forward to meeting that woman one day.”‘

‘Known for her win on Top Chef, but even more for her dynamic personality and hilarious wit, the young chef inspired thousands across borders. Please recite a special prayer for her and her loved ones. May she rest in power.’ 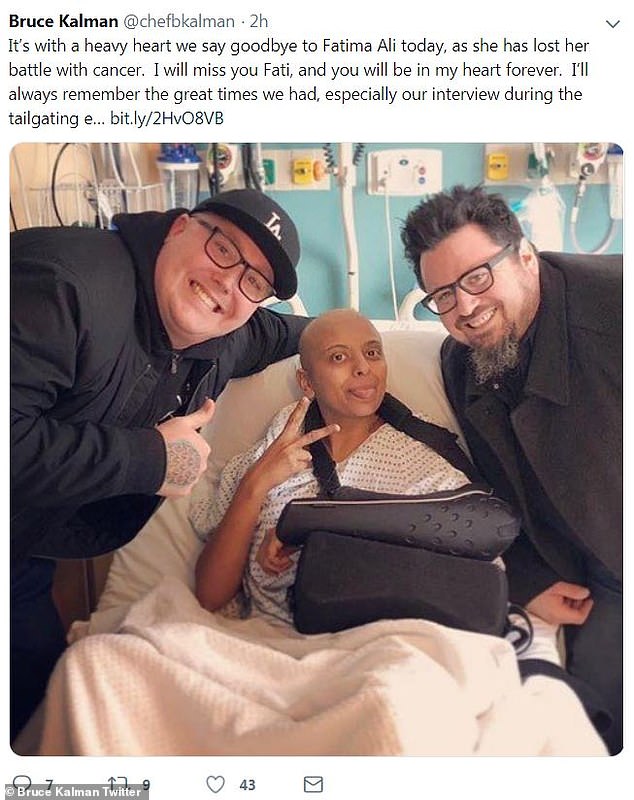 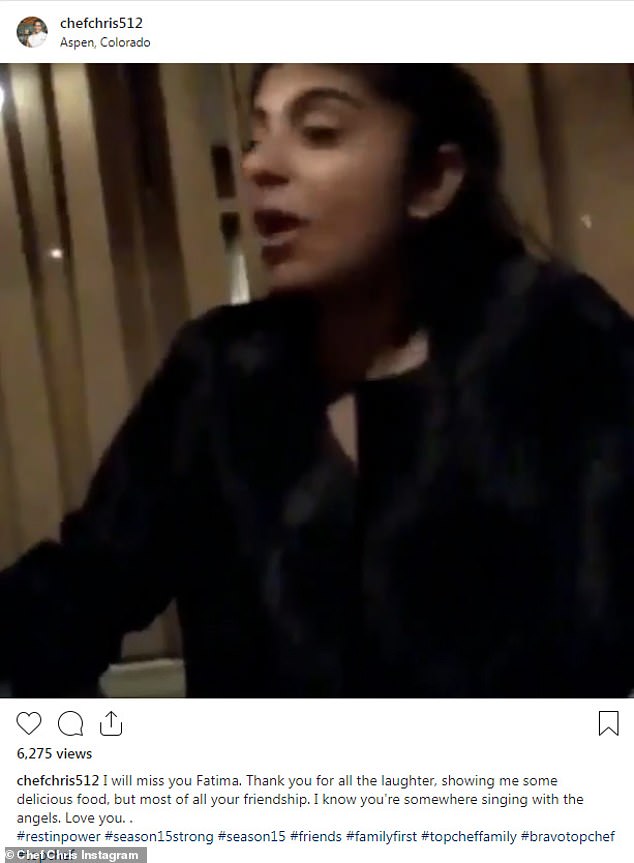 In mourning: Chef Chris wrote ‘I will miss you Fatima’

Chef Chris shared a video of Fatima, writing: ‘I will miss you Fatima. Thank you for all the laughter, showing me some delicious food, but most of all your friendship. I know you’re somewhere singing with the angels. Love you.’

Chef Tyler Anderson shared a sweet photo of himself touching heads with Fatia.

‘You will be forever missed my friend,’ he told her. ‘You brought so much joy to those around you.’

In October, Fatima published a moving essay revealing that her cancer had returned, and been found in her hip and left femur.

‘I was looking forward to being 30, flirty, and thriving. Guess I have to step it up on the flirting. I have no time to lose,’ she wrote. 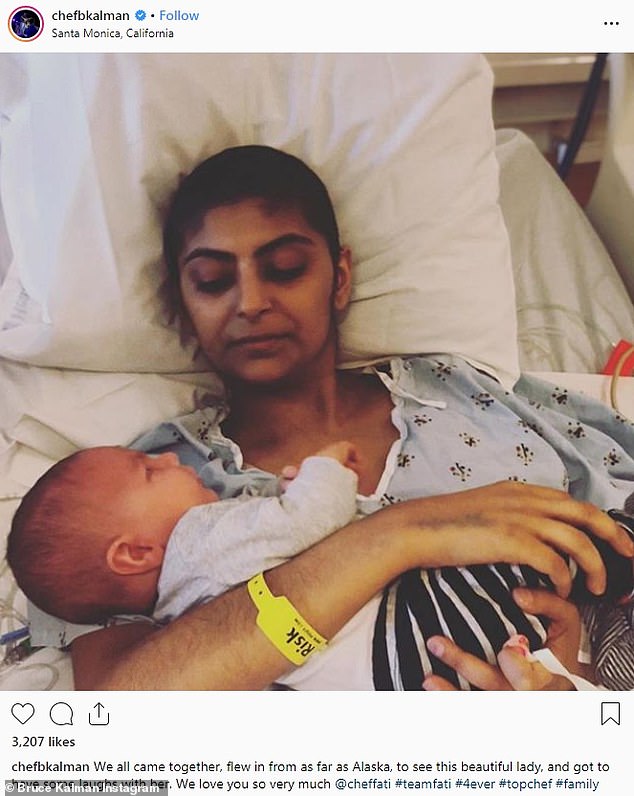 Chef Joe Flamm shared a photo of Ali holding his little one Luka two weeks ago, captioning the heartbreaking post with a simple: ‘Today was a good day. #TeamFati’

Earlier this month her friends from her time on Top Chef family flocked to Southern California to be with Fatima in her time of need.

‘We all came together, flew in from as far as Alaska, to see this beautiful lady, and got to have some laughs with her. We love you so very much,’ chef Bruce wrote with one Instagram of his travels. 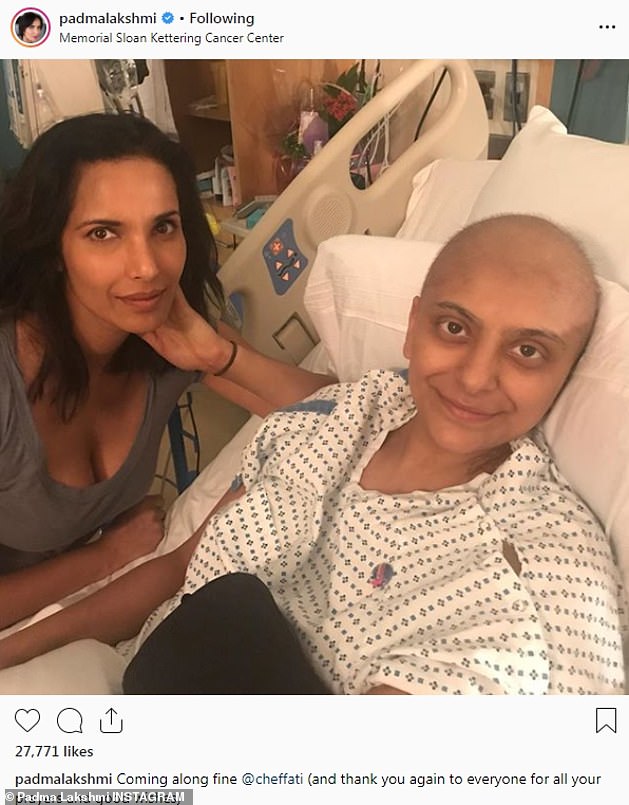 Staying strong: Padma Lakshmi, 48, has visited Fatima periodically, including after her initially surgery in January 2018; pictured in January with Fatima after her surgery

The Bravo gang gathered to show that they were ‘Season 15 strong’ in a group photo of their travels reposted by nearly everyone. Fatima was not in the photo, however.

Echoing her message, Melissa Perfit shared: ‘So bittersweet to see all these amazing friends come together to see our sweet @cheffati . It’s impossible to explain how we all feel. You are so amazing. We love you so much.

Some of the chefs even brought along their offspring to cheer Fati up.

Chef Joe Flamm shared a photo of Ali holding his little one Luka, captioning the heartbreaking post with a simple: ‘Today was a good day. #TeamFati.’ 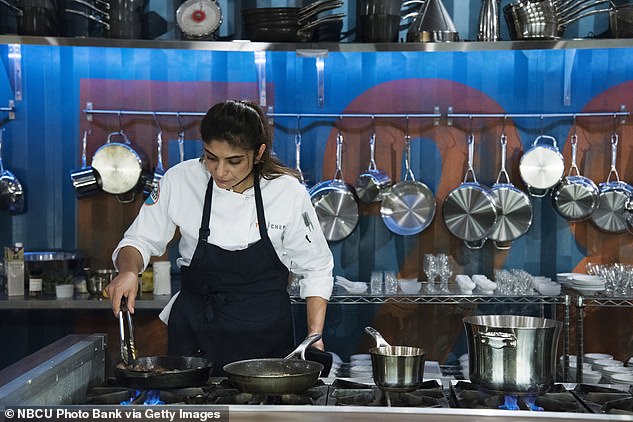 Trying to stay optimistic: The Top Chef season 15 star published a moving essay in October revealing that her cancer was now terminal 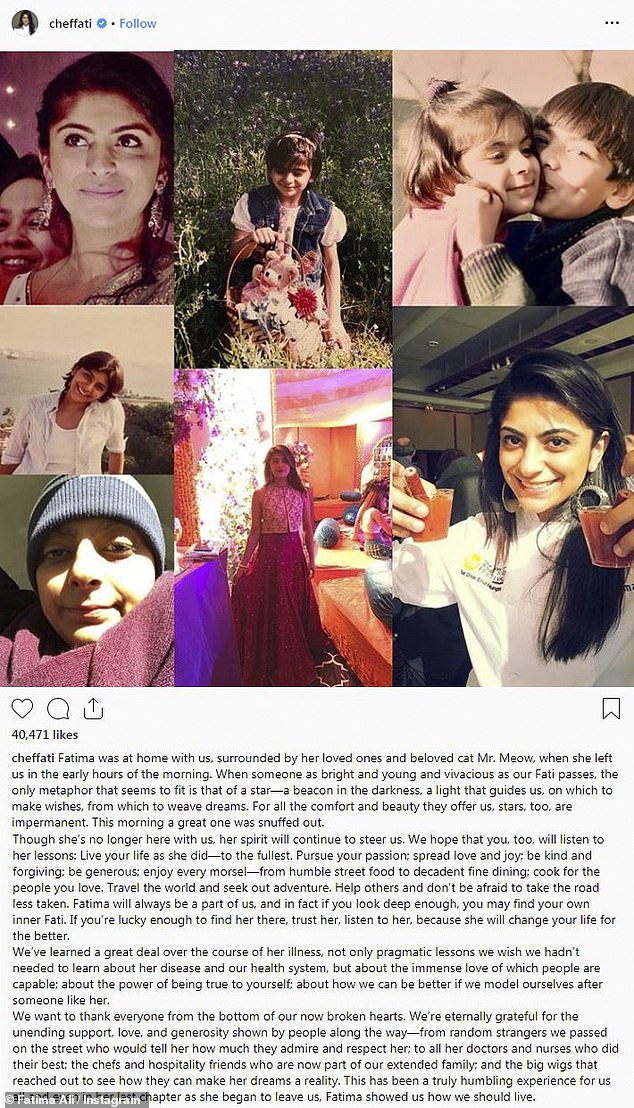 Heartbreaking: Her family left a loving and heartbreaking message on her Instagram